Recruitment and Selection in Company Expansion

Khajurico Nepal is a family owned cottage industry based at Chapagaun, Lalitpur, Nepal. It was established in 1990 with a brand name of Khajuri foods and late in 2003 it was trademarked under Khajurico. Khajuri foods started its brand name by introducing bread and since 1994 it has been expanding widely with diversified products such as cookies and puff pastry. It is the only company where all the production employee is women from which we can see how Khajurico Nepal is promoting women empowerment. Today, Khajurico Nepal not only supplies its product at Nepal but also has opened its new factory in India named after Khajurico India Pvt. Ltd. and supplies its products to Australia, Tibet, Ghana, etc. (n.d.)

Establishing a company in a foreign country is a risk. It isn’t confirmed whether the company will work or not. There may or mayn’t be the market for the product that you are going to launch. Similarly, there might also be a problem with the tax, wages and law since the law of one country varies from another and the change in law can occur anytime. Likely, the cultural and language barrier also creates problem while launching a product as the company doesn’t know what the local prefers. (Goodman 2015).

Recruitment is the process where the organisation seeks for the new employee through the forms and cv that are applied by the candidates. Recruitment can either be internal or external. Internal recruitment takes place within an organisation whereas in external recruitment company brings new staffs by following up certain procedures such as job analysis, job description, job advertisement, etc. (Anon 2017).

Selection is the process where right candidates are picked from the list of applicants through different methods such as: testing, gathering information and interview. A candidate is selected after he/she clears all the track races of the selection process. During the selection process, a person should neither be underqualified nor overqualified for the applied post. Hence, they will be placed a misfit for the post. While the selection process it is also important to review their past experience and references (Muhammad Umer Khalid Habib 07:20:48 UTC)

Along with this the recruitment and selection process is also a crucial process as the company either needs to recruit their own staff or recruit the staff from the host country of from foreign country. All of these has its own advantages and disadvantages. 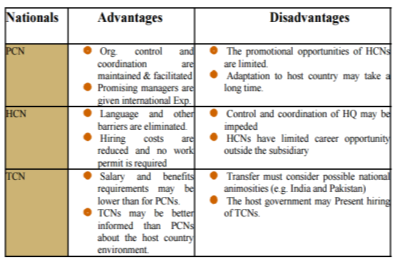 The Recruitment procedure of KNPL:

In order to recruit their staffs KNPL follows the following procedure;

So as to hire and fill the vacant position KNPL follows the following methods;

Usually, during the selection of candidate the head of HRD submits the evaluation sheet to the CEO which indicates the names of candidates, marks obtained by them in both written and interview and the total score. And through that sheet the CEO makes further appointment. If any of the recommended candidate is unavailable for the appointment, then the next candidate will be appointed. However, it is upon the CEO on how to select the candidate for vacant position.

Hence, the appointment will be disqualified and will not be appointed in the institute if;

Whether the company is established at home country or a host country it is obvious that they expect high performance from their staffs individually. And in order to achieve a good performance certain steps should be taken which are explained below;

Induction/orientation is the process of letting the new employees to get adapted towards their new working place. In this phase, the new recruited employees are introduced to their workplace, their work colleagues and their role in that organisation. Usually, every company does an induction/ orientation programme since every candidate has their own prospective (Anon 2016c). In every organisation the induction usually take place in the first day where all the information regarding the company and business code of conduct are provided to the employees.

Training is the process of providing extra knowledge, skills, attitudes or social behaviour to the staffs so as to perform the job more efficiently, effectively and skilfully as per the trend and technological change in the market. Since, training takes lots of effort and time, it is very important for an organisation to think regarding the need and objective while providing training to their staffs since high qualified professionals are used.(Anon 2016a)

Coaching is a technique where the managers act as a coach and guides its sub-ordinated through their experience and knowledge. (Anon 2016b). Coaching can also be defined as a facility that is given by the higher level to their subordinates so as to help them to achieve their goals, develop their own personal strategy and improve their efficiency of doing the work (SEGERS et al. 2011). Hence, it is the way of achieving through daily feedbacks and communication of the staffs.

Rewards are the benefits that an employee deserves after his/her excellent performance in an organisation. Rewards can either be financially or non-financially, financial reward includes salary increment, bonus, allowance, etc. whereas non-financial reward includes accommodation, insurance, etc. Every employee joins an organisation with an expectation of getting reward as per their performance(2017).However, these include linkages with performance expectations in:

It is an implication that identifies the problems, reviews it and works on the problems along with their best employees so as to meet performance expectations for a job different from the one she/he currently holds with greater responsibility. It helps to boosts its employee morale by providing them the position as their performance. Hence, succession planning is done so as to fill the vacant position. (Anon 2016d)

Today, as per the change in the economic, cultural, environmental and political status, it is a challenging thing for any organisation to establish as well as maintain a goal to achieve an affective commitment from their new employees. According to Sayeed (1989) the personal character, role related factors and structural factors are the board antecedents of organisations commitment. Allen et al. (1990) says that organisational commitment is either affective or emotional attachment towards the organisation. (Kumari & Afroz 2013)

In this technological era, it has brought up many changes in the working environment of the people. People not only seek good working condition but also seek higher income, benefits, commitment, etc. So as to get achieve a commitment from their employee an organisation needs to fulfil every employee needs. However, a company can achieve an affective commitment through its employee by their employees psychological state such as; (Anon n.d.) (Jaaron 2009)

It is the emotional attachment of an employee towards its organisation. Here, he/she doesn’t fear of any losses but strictly follows the company rules and regulations and states the organisations goals and objective.

Some employee fears that by leaving the job they might face problems such as low salary, pension, low allowance, working environment, etc. due to which they get stuck to their job thinking that their change in job might create trouble in their life. Hence, these type of commitment is more seen in higher level staff as they are already established in the particular company and fear to lose the position.

It is a thinking of the employee that he must work in the organisation. Here, he/she feels that it is their responsibility to work in that organisation. There might be several reasons of an employee to have such commitment such as the company might reward them by paying their education or it might be their own perception to do so.

However, it is very much important for an organisation to gain the commitment from their employees so as to increase their level of quality and performance.

Culture is the characteristic of particular group of people that belongs to certain part of religion, place and language (Zimmermann et al. 2015). A culture may vary from the people of same or different country. For an organisation, it is a must to understand the culture of the host country and should be sociable with the consumers. They should be updated regarding the potentialÂ  business challenges to overcome the competitive market. Following can be the issues on cross cultural management; (PGPExecutive 2015)

People have their own way of thinking, doing, talking or seeing. A word can have several meanings, for example a person can utter a word that might be the same language as of the another but the other person might take it differently which increases misunderstanding between the people. Likely, every culture has its own unique value, and might be reluctant in adapting new culture in the host country. Hence, ambiguity creates an incorrect perspective within an information that one wants to deliver to the listener.

There are some people who go to the host country and hesitate to participate in their culture which gives an impression that they are not comfortable with the environment that the host country is providing. Showing this kind of behaviour will hamper the person rather than the host because he/she is the one to lose the team and destroy the relationship of the business with the host country.

It is obvious that an organisation faces challenges during their working period. There are several challenges that Khajurico Nepal Pvt. Ltd. should follow up;

Customer demography denotes the age, sex, gender, income, race, status, etc. which helps the organisation to target their customer. KNPL should not only understand the demography of the customers but also needs to understand what exactly the company needs to do inorder to maintain relation with their potential customer (Staff 2017)

The political issues can both be internal and external. External issues include the following; (Contributor 2015)

Hence, if such issues occurs KNPL should either ask for compensation with the host country or purchase political risk insurance ( it doesn’t guarantee that the company will get its compensation through insurance as soon as the event occurs) (Phung 2006).

The internal issues occur within the organisation. It might include the following;

Hence, if the internal issue occurs KNPL should organise frequent meeting between the staffs and the management, equal opportunities should be given as per their level of performance and the management should have a flexible approach towards the employee’s feedback.