Photovoltaics in the Energy Industry and Nanotechnology

The field of nanotechnology dates back to the late 1950’s when theoretical physicist Richard Feynman gave his famous talk called “There’s Plenty of Room at the Bottom”. In his talk, he introduced the concept of the control and manipulation of objects i.e. atoms, molecules, at a minute scale. It was K. Eric Drexler who popularised the term nanotechnology after using it in the title of his book “Engines of Creation: The Coming Era of Nanotechnology”.Â  The term nanotechnology can be defined as the science of studying very small things or in other words studying things at the nanoscale (1-100nm).

During the latter part of the 20th century increasing advances in microscopy technology such as SFM, AFM and TEM allowed scientists to view nanoparticles. A particles properties greatly changes when the particle is in the nanoscale range. This is due to the Quantum Effects phenomena. Properties such as melting point, fluorescence, electrical conductivity, magnetic permeability, and chemical reactivity are vastly altered as the size of a particle reaches the nanoscale. As a result of the quantum effects that occur at this scale, a materials properties can be tuned to give a desired property by changing the size and shape of the particle. There are however many other parameters that affect a materials properties these will be become more evident later.

A simple example where a materials properties change with reducing size to the nanoscale is that of the element gold. To the human eye gold appears to be a yellow colour while nanoscale gold a reddish colour is observed. This is as a result of the previously mentioned quantum effects, in this case the electrons of nanoscale gold particles are trapped (confined) and as a result react differently with light giving a different colour. This trapping of electrons property (quantum confinement) will further discussed later.

As a result of the many desirable properties that are present in nanomaterials, numerous industries and fields alike have and are developing applications incorporating nanotechnology. The previously mentioned example of gold nanoparticles are utilised within a number applications of the medical industry. Biomedical applications for laser phototherapy, therapeutic agents as well as drug carriers have all been developed using gold nanoparticles. 1

The previously stated property of increased reactivity that occurs at the nanoscale relates to another specific property nanomaterials attain. As the size of a particle decreases the surface area increases. This increase in surface area has a profound effect on the reactivity between materials i.e. greatly enhanced reactivity. A number of different applications benefit from this nanoscale property including applications relating to the energy industry such as catalysts, energy storage and energy conversion devices.

Nanotechnology has led to fabrication of novel devices and equipment and also many applications in a variety of fields none more so than the energy industry. Although several strides have been made in recent years in new technologies in the energy, current technologies cannot cope with man kinds ever increasing demand for energy. Therefore, there still remains a need to develop new sustainable energy technologies without detrimentally effecting the environment. Many leading experts in the energy industry believe that nanotechnology is the way forward to curbing these energy issues. 2,3

Photovoltaics in the Energy Industry

Nanotechnology has in recent decades been incorporated into a number of technologies in the energy industry that utilise solar radiation as an energy source. Exploiting the sun’s energy is by far one of the most suitable ways out of all the renewable energy resources that exist for a number of reasons. Solar energy is free and basically limitless as solar energy provides approximately 15,000 times more energy in a year than is actually needed to meet the worlds current energy demands. 2

The need to incorporate more renewable energy and replace existing fossil fuel based energy resources such as coal, gas and oil stems from their negative environmental impact. The ever increasing global temperatures are directly relating to rising CO2 levels, this is in part is as a result of the increase in the consumption of fossil fuels since the industrial revolution and peaking today in the early 21st century.

The lack of utilisation of solar energy technologies such as photovoltaics (The 2014 GSR report indicates only 1.2% of global electricity production comes from photovoltaics) despite it being free and its wide abundance is largely due to cost. 4 It is the main reason why photovoltaic devices have failed to become more mainstream especially in comparison to non-renewable based energy sources who’s cost per Watt of electricity are generally lower. The price of electricity produced from photovoltaics has certainly decreased in recent years as outlined in the Renewables 2016 Global Status Report. Prices in Germany for photovoltaic electricity have been quoted to be as low as â‚¬0.08/kWh which is comparable to the equivalent price of natural gas. Despite this figure the costs of photovoltaic electricity can be further be reduced with continued advances in its technologies.

Electricity is produced in PV solar cells by conversion of photons from the light harnessed from the sun, otherwise known as the photoelectric effect. Traditionally PV’s are fabricated using silicon wafer based solar cells. These wafers comprised of crystalline silicon are generally between 150-300 nm in thickness and these largely remain the main material in PV fabrication today. A variation to these PV devices includes utilising semiconducting thin films on top of complimentary silicon wafers. This method is a much more cost effective method but suffers from poor photon to electricity conversion rates. 2

The integration of nanomaterials specifically nanocrystals in the fabrication PV devices can curb some of the limitations that currently exist. First, the ability to control the energy bandgap provides flexibility and inter-changeability. Second nanostructured materials enhance the effective optical path and significantly decrease the probability of charge recombination. Thirdly and most significantly solar cells utilising nanocrystals have shown great potential as a low cost alternative to conventional solar cells. Solution based synthesis methods such as the colloidal method has a relatively straight forward process. The solution containing nanocrystals can easily and efficiently be incorporated into a solar cell using a number of low cost deposition techniques. As well as these facts copper based nanocrystals have attracted a deal of attention due to their abundance and low cost, which further emphasises the probability of nanocrystals replacing conventional solar cells.Â  Figure 1 below provides contrasting schematic’s of the conventional silicon based solar cells against the new generation of solar cells. 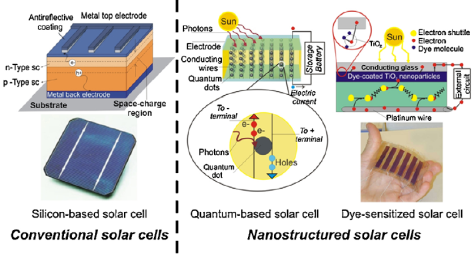