Assignment 2 of Pattern recognition should contain the classification theory. The topics should cover:

As the name indicates, the pattern recognition is the classification of a pattern to one of the pre-specified classes. The process of understanding or recognizing the patterns by taking the raw data from a sensor, convert that raw data into some meta data by pre-processing that raw data, producing segments of the data through some sort of segmentation process and the pass those segment through some feature extractor which lead the purification of the raw data to be understood by the Classifier. Based on the feature extracted will classify it to a certain class which is already defined by the decision boundary. The decision boundary is obtained from a series of training data and the cost related to it.

In short, the process of identifying object or pattern into some sort of classes based on some features which are been described by the decision rule. A simple example for it the identification of the seabass and salmon fish passing through a conveyer belt. Certain features like the height, width and lightness can be used to develop a decision boundary and put any fish into its respected class (sea bass or salmon).

It is the analysis of in what way the machines observe the environment, come to know about the different patterns and make a rational decision about the class of the patterns.

A typical pattern recognition system consists of the following components:

The above mentioned components are given in the Figure 1. 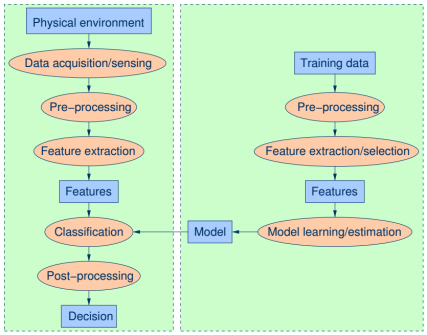 Given below are few of the pattern recognition potential research areas:

Pattern recognition has outnumbered amount of applications, some of which are as follows:

Given below are the fundamental steps involved in pattern recognition:

Sensing: The pattern recognition systems require a sensor at the input in order to take raw data from the environment into the system.

Feature Extraction: Some specific parameters of the pattern are measured in this step like length in the fish example.

Classification: The patterns are then classified through some sort of classifiers like Bayesian Classifier. Classification is done for putting the pattern into a specific class or category e.g. sea bass or salmon.

Post Processing: This step is done for further improvement of the performance.

The compacting technique is used for improving the characteristics features of data using various transformation methods like the Fourier Transform method, WT etc.

Reduce the data dimensions by removing the mutually correlated features which results in the reduction of the common information to produce a set of nearly real informative parameters.

The following are the potential research areas in the field of pattern recognition:

The probability of a state of nature that show how likely is that, that particular state of nature would occur. For example, in the fish example it is given that the prior of the salmon is 0.85. This mean that salmon is 85% more likely to appear than the sea bass. If number of classes are c, then:

It is the probability of a specific state of nature given that observables have occurred. Mathematically, 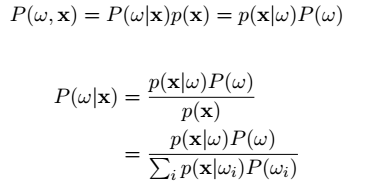 It shows the cost related to each wrong action or decision we take. Mathematically,

The expected loss is also called as conditional risk. It is defined as the summation of the product of loss occurred from each decision to its posterior probability. Mathematically:

Overall risk is given by:

From above equation we come to know that by selecting only those action Î± (.) that minimize the