NTUC Income was founded in 1970. NTUC Income is the only insurance co-operative in Singapore. It was established to make essential insurance accessible to all Singaporeans, they are now a leader in life, health and general insurance. On June 1, 2003, Income succeeded in the migration of its information systems and business processes to a digital web based system. Following the major IT Investments, the Orange Revolution was launched in late 2011, targeting existing and potential customers. Orange aims to make insurance at NTUC Income “simple, honest and different” and to change practices in the insurance industry by “doing things differently”.

NTUC Income used the HP3000 mainframe that hosted their core insurance applications together with their accounting and management information systems. The system was unreliable and frequently broke down. NTUC Income’s in-house IT team maintained decades old COBOL programs which also regularly broke down causing disruptions.

The business processes used by NTUC was a paper based system as outlined in the following diagram; 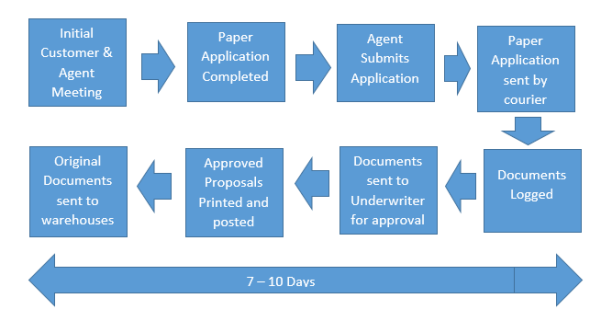 Problems associated with the old systems;

In 2003 NTUC Income switched to a Java-based eBao Lifesystem from EBao Technology. As part of the eBao implementation, Income decided to replace its entire IT infrastructure with a more robust, scalable architecture. Examples include the following;

The Orange Revolution was launched in late 2011 with the aim of making insurance at NTUC Income “simple, honest and different” and to identify and resolve major issues customers experience when dealing with insurance firms. The methods used to implement the “Orange” strategy include;

The “Orange” strategy would not have been possible with the old systems. The strategy is effectively based on honesty and trust and delivering first class customer service which requires quick, reliable and accurate data in real time.

In conclusion, the Orange Strategy would have been guaranteed to fail with the old systems which could not provide the functionality, security or reliability required to implement the Orange strategy. The new digital systems provided many new capabilities which facilitated the successful implementation of the Orange Strategy.

Three important lessons for Irish retail banking which can be drawn from the NTUC case study are the following;

Irish retail banking must continue to invest heavily in IT to ensure that customer data is accurate, secure and always available. Customers want new services based upon 21st century technologies. Technology helps banks to service their customers through their various banking channels. NTUC Income’s investment in technology represents their commitment to identify and resolve major issues customers experience when dealing with insurance firms.

Ulster Bank was fined â‚¬3.5m by the Central Bank for disruption to its technologies when IT failures affected 600,000 customers in the summer of 2012. The financial authority also reprimanded the bank over the issue and said it had failed to have adequate governance and control measures to deal with problems within its technology systems. The IT issues occurred over a month-long period between June and July 2012 and affected customers’ ATM withdrawals, card purchases and the processing of payments including salaries. The Central Bank said that financial firms were required to maintain robust governance arrangements and appropriate controls across all of their systems, including IT.

The Central Bank said the fine reflected the seriousness with which it viewed the failings of Ulster Bank and its determination to ensure that customers have access to core banking services without disruption.

This case demonstrates the importance of the requirement for continuous investment in technology and system upgrades as the consequences are outages, failures, negative publicity and ultimately a loss of business and reduction in profits.

Branches and traditional products and services still are desired by many customers but people want more than this and financial institutions are trying to improve the customer experience and deliver the products and services demanded by digital consumers. Banks can now interact with customers through a variety of channels e.g. call centres, retail branches, online channels, apps, which are all enabled by a digital service infrastructure.

NTUC Income’s culture had to be altered slightly so that their organisation could become more active, energetic and contemporary, essential attributes for cooperatives to compete and succeed. This shift in culture made NTUC Income more innovative, they listened and engaged with their customers and responded to their feedback. The importance of responding to customers concerns and needs should be prioritised by Irish retail banking and banks need to be prepared to adjust their culture accordingly.

Ulster Bank is in the process of attempting to transform the bank because of customer changing requirements. Ulster Bank recently announced it is to close 22 of its branches across the country. Ulster Bank stated that the announcement follows a customer shift away from traditional in-branch banking towards digital channels. Last year 62% of Ulster Bank’s customer interactions were digital, compared with 10% in branches. This case demonstrates Ulster Bank’s commitment to respond to their customers changing needs.

There is a requirement for Irish retail banking to be innovative and keep up to date with customer needs, technology and changing environments. The relationship between Irish retail banking and consumers is rapidly changing, with interactions increasingly occurring on mobile devices, in real time with contextual benefits. In 2013, 968 million smartphones were sold globally. Digital banking trends cannot be ignored by Irish retail banking and need to be central to Irish retail banking strategy as we approach 2020. Ulster Bank like NTUC Income with its Orange Force strategy must continue to meet customers ever changing needs with innovative new ideas. In this regard, Ulster Bank have recently demonstrated that customer-centric innovation is important to the bank, when they announced their partnership with Apple in bringing mobile payments to the everyday lives of Irish people. Apple Pay will make mobile payments easier for Ulster Bank customers. They will be able to pay for goods and services anywhere contactless payments are accepted, using their iPhone or Apple Watch. Like NTUC Income, Ulster Bank is responding to their customers changing needs and putting “people before profits”.

NTUC Income changed its culture from the top down. NTUC Income put their entire business on the line in changing their business systems and processes. They moved from systems with many limitations to implementing new technologies. It was a change which proved very successful. It allowed NTUC Income to go back to basics, putting their customers first, caring for customers, understanding their needs and responding to those needs. They instilled this culture whereby they placed “people before profits” throughout the organisation which lead to them gaining customers trust and increasing profitability.