Gender in Advertising – An Analysis

Women have been portrayed in numerous roles throughout the ages in advertising, varying from wife and mother to business women. This essay will delve deeper into two certain time periods, (the 50-60’s through to the 2000 to present day.) and what roles woman were portrayed in during these times. If there is significant changes between the two time periods questions will be asked into why they have changed and is this due to different attitudes in society. 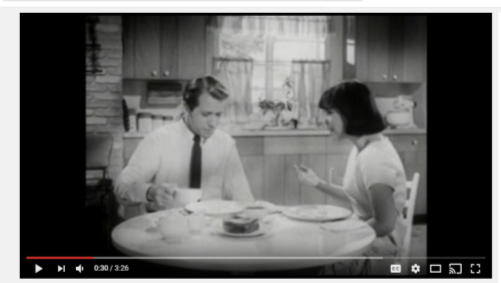 As ‘Advertising of the 1960s, was considered a decade often called the Golden Age of Advertising.’ (Nemhauser, M. (2014) Real Mad Men, P1) It would be thought that the adverts within this era would be powerful and memorable. However it is memorable to woman for all the wrong reasons. Woman within adverts through the 50-60’s were only ever portrayed as wives and mothers, and more often than not they were always making a mistake within their role. For example within Figure

1, it shows a print screen of an advert by Folger’s. Within these averts It portrays woman who are incapable of making a good cup of coffee for their husbands. All of the Folger’s adverts around the 1960’s went with the same vain. That before the men were going out to work on a morning their wives would make them an awful cup of coffee. Portraying woman as useless wives that couldn’t even do the simplest task correctly. The strategy behind the advert was to guilt trip women into buying Folger’s coffee so that they could finally make their husbands happy. Although this technique did work, when looking back onto this advert, it simply berates and undermines woman.

However as the war had passed and lead to more woman taking on other roles in work forces rather than just wives and mothers, advertising changed with them the times. Different forms of advertising made use of this revolution by showing woman taking on different roles like secretaries. Although this should have been a good thing, portraying woman out of the house, it still showed very sexist views against woman as a gender. For example woman were never seen as the boss or anyone in power they were always just a general lower class employee, and often only at work to help men.

A primary example of this can be seen within Figure 2. A classic Xerox advert that portrayed a woman as a man’s secretary having to do jobs like printing, scanning, filing etc. All jobs that would help the man within his career. Although this isn’t enough to show a woman as just a secretary, the advert has the woman stating many things that she can’t do. ‘I can’t type, I don’t take dictation I won’t sharpen pencils, I can’t file, and my boss calls me indispensable.’ This portrays the woman as a 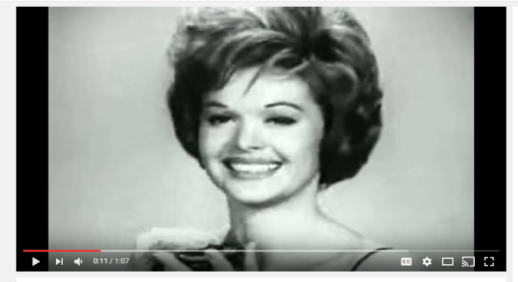 very weak individual. The advert goes on to show the woman being told to photocopy something for her boss, and she’s able to due to the Xerox machine as it’s easy to use just press a button and it does the work for her. Although the adverts have changed from wives in the kitchen to a woman actually working for herself, all the adverts in the 50-60’s have the same underlying message. Which is that woman can’t do anything right, and If they do it’s because they’ve had help from a product, such as a Xerox machine or Folger’s Coffee. Which in turn portrays woman as the weaker class in comparison to men.

The final advert to investigate is a print advert, figure 3, from the 1950’s for Mr Legg’s. Through this print advert the message is more direct than the others, the fact that men are far more superior to woman. This was only hinted at through the other adverts, as the man went off to work to earn the money while his wife couldn’t even make a coffee. To a boss telling his secretary to do something that she wouldn’t have been able to do without Xerox. Although they both shown men as superior, figure 3 displays this message in a much more abrupt way. 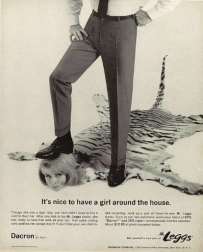 As seen within the poster a man walks all over a woman, and the message that can be taken from the ad is that a woman can easily be tamed with the use of brute force, animal magnetism and a pair of Mr Legg’s Slacks. 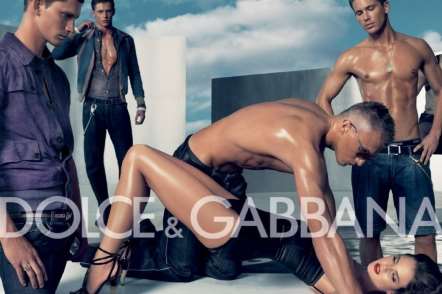 In conclusion adverts from the 1950-60’s portrayed woman in not the best light. It showed them as people who cannot do things right without the help of either a man or a product. Causing them to be seen as the weaker sex and inferior to men. This could be due to the fact society in that era were very set in their ways. It was the men who went off to war and the woman stayed to look after the house and children. It had always been this way and nothing had ever changed it. However due to the growth of feminism in the late 1960’s the debate over the portrayal of woman in adverting intensified and ‘the National Organization for Women, founded in 1966, sought to eliminate gender based stereotypes in the mass media.’ (Unknown author, (2003) Woman: representation in advertising.)Â  This could have been the start of where woman were giving an equal representation within the adverts we see to this day.

It is only since the mid-20th century that women have been shown in roles other than house wives and woman doing their job wrong. Therefore this must mean advertising has taken a turn for the better, where the portrayal of woman is concerned. Yet when looking at Figure 4, it shows a woman being restrained by a man while other men look on. This feels again degrading to woman in a different way to the ads of the 50-60’s, as there is actually no body copy or script stating that woman are inferior to men however this is stated through just the use of the image and is still just as demeaning towards the female figure. The role of the woman in this ad seems to be there for the pleasure of the men. As the look on the woman’s face almost looks expressionless, and absent from the scene as if she is trying to escape the thought of the situation. The fact that she is being restrained also suggests that the woman needs to do whatever the men want, much like the ads from the 60’s. This particular advertising campaign was banned a few weeks after its launch due to the backlash it received from woman.

Another campaign was launched in 2013 by American Apparel, figure 5. This shows two ads portraying a man and a woman in the same shirt. The campaign is trying to sell the same unisex shirt to men and woman in two different ways. However both the ways used seem to be geared towards men. As the woman is half naked therefore being used as a sexual object to sell the shirt to men. This type of advertsing is not geared towards woman 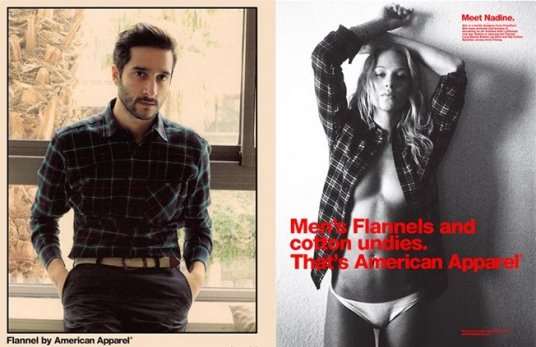 There is less body copy on the more recent adverts however still the same underlying meaning have.

There is difference between the two times periods, therefore indicating there has been some change in the attitudes of society. People’s attitudes have most certainly changed due to the fact the Dolce & Gabbana ad was actually pulled just a few weeks after its launch. This shows that woman do have a voice and are listened to. Unlike in the 50-60’sÂ  where if the woman did not like the way they had been portrayed in an advert, then it was probably their fault for being offended anyway. Although there is changes in society, “images of woman in advertising have hardly been uniform, but several themes recur; the housewife ecstatic over a new cleaning product; the anxious woman fearing the loss of youthful attractiveness; the subservient spouse dependent on her assertive husband; the object of means sexual gaze and desire” (Pope, D. (Unknown date) Making sense of advertisements, P6).Â  This has always been the case since advertising begun and to this day. Showing us that society has changed from showing woman in multiple roles rather than just a woman doing something wrong. However these multiple roles can always be seen in one of the groups stated by Daniel Pope.

To conclude the roles of woman have changed throughout time. However even though the roles have changed from housewife to beautiful models there still is a reoccurring theme throughout all of the adverts examined. That sexism in which woman are portrayed has only adapted from woman needing men to pleasing men, it hasn’t went away or got any better. It’s is just been advertised in different ways. A lot of the adverts today show woman as just sex symbols, to please men and due to this all ads seemed to be geared towards men. Furthermore I think woman’s roles in advertising has always been inferior to men, and probably always will be until everything between men and woman is equal.