Employee Wellbeing in a Prison Workplace

With specific reference to the research question, that of:

‘Does the impact of organisational change and a Transformed Workplace affect the Health & Well-being of employee’s within a Prison Workplace Environment?’

Key to the development of the Aims & Objectives is the evaluation of similar research (Bamford and Daniel, 2007; Hyde et al, 2005; Van Stolk et al, 2009) conducted within a similar Government Department that has also been subjected to workplace transformation (new ways of working; Hyde et al, 2005). In this instance the Government department was that of the NHS (National Health Service).

Also the use of research that assesses the impact of the workplace upon an individual’s well-being, which includes 2 case studies that have researched wellbeing within the workplace (Danna & Griffin, 1999; Harter et al, 2002)

In making use of such literature, evaluate whether or not and to what degree it either supports or contradict the research question.

To assess how and to what extent (positive or negative) the managed change and transformed workplace has affected employee’s health and wellbeing and to assist in the development of baseline data for further analysis and evaluation in regards to the efficacy of targeted wellbeing interventions.

Review literature in regards to ‘New ways of working’ and organisational change (Both the NHS & NOMS) and its impact on health and well-being. To determine the survey model content.

Develop, implement and analyse a staff health and wellbeing survey tool based on objective. Survey undertaken using survey monkey / paper, complete anonymity, distributed across all staff. 2 principal pay-band groups within the organisation, that of paybands 1-4 and 5-10 to ensure anonymity, and in the use of incident data, such as organisational sickness absence data. Identify if the impact of the transformed Workplace & regimes has affected absence. All absence data will be provided by HR and will be anonymous and generalised by specific factors prior to inclusion in the study, i.e. type of absence or organisational demography (operational and non operational staff). Permission for use of the data has been given.

The aim of this research and the Health and Wellbeing survey is to identify and understand the respondent’s perceptions as a consequence of the transition to and impact of the “Our New Way”, the new operating model adopted by the NOMS agency, as part of the strategic plan to create a modern cost efficient publically owned prison service.

To better understand this transition, and also as part of literature review, a review was completed of similar research of another government organisation that had completed a similar transition, that of the NHS (Hyde et al, 2005; Van Stolk et al, 2009).

Making the use of tools such case studies that have looked into the impact upon well-being within the workplace (Danna & Griffin, 1999; Harter et al, 2002; Van Stolk et al, 2009); the methodology used in research (Thirlaway et al, 2012) at Cardiff Metropolitan University and also the Survey development model developed by RAND(Europe) (Van Stolk et al, 2009 p. 3) will assist in the development, piloting and analysis of a survey tool.

The aim of this survey is, as part of the evaluation of the consequences of organisational change was to provide a question set, based upon the new operating model ‘our new way’. Furthermore, based upon responses to questions posed, perform an analysis of the responses in regards to their physical and mental health and well-being, during and post transition to the new operating model.

Using a structured model of questions, that of the ‘Likert 5-point Scale’ that ranges from strongly Agree to Strongly disagree, this will enable the research to gauge perception both positive and negative in regards to an individuals’ wellbeing following a period of sustained change and transformation.

The design and format of this survey was set out to gauge the views and perceptions of the Prison Service Staff, both generally and specifically in relation to the workplace, the transition to the new operating model. The Survey comprises and is composed of 3 specific elements;

Element 1 provides demographic data, that of personal information (i.e. Age gender pay-band), providing evidence that the responders, are both anonymous and a ‘cross-section’ of employee’s within the organisation

Element 2: Exploring the impact of the new operating model; ‘Our New Way’

Element 2 seeks to determine respondents response in regards to the new ways of: Working, Managing and Delivering (Independent Variables) and how following the transition to a new operating model, how the transition has impacted upon not only an employee’s, physical and mental well-being, but also the impact upon organisational engagement (Dependent Variables) (Figure 04; below).

Element 3: Opened ended question to explore respondent feelings and perceptions of the transition to the new operating model

Element 3 seeks to determine respondents response through an open ended question, to explore and evaluate how the transition to the new operating model, has affected each specific respondent and has impacted upon their Physical and Mental Health and Well-being. 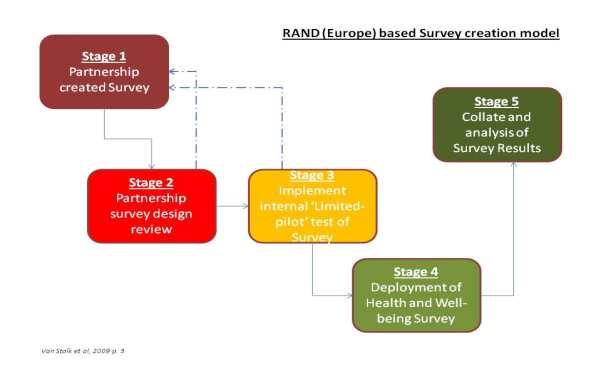 Making use of the method and model developed by RAND (Europe) (Van Stolk et al, 2009) the survey was designed, working in conjunction with both Cardiff Metropolitan University; NOMS: H.R. Directorate and also Stakeholders within the Prison Service at HMP Exeter, up to and including the Governing Governor; using 5 specific stages; from the inter-partnership creation of the prototype survey models, to the initial tests, through to the Survey deployment, completion and analysis (Figure 05 below).

The successful creation of the Health and Well-being Survey was as a result of working in close partnership with Cardiff Metropolitan University, the NOMS Human Resources’ Directorate and also with Senior Management Organisational Stakeholders from both NOMS and also HMP Exeter.

The creation of question a set was based upon the framework of transformation, the delivery model and documents of the new operating model; “Our New Way”. This included specific and directed approaches in the creating of the questions posed. It was essential that the questions were concise and simple to understand, to make them complex to understand, could lead to erroneous responses due to limited or misunderstanding of the question. From this perspective the experience from both NOMS Human Resource Directorate and Cardiff Metropolitan University was essential.

This stage, involved testing the questions, for at this stage it was essential to ensure that through an ongoing process that the survey questions were neither too complicated, nor too vague. Key to this approach was open, consistent advice and guidance upon how the questions could be interpreted and would be understood.

The aim of this stage was to undertake a limited implementation pilot test of the survey, to ensure that not only that the responders would understand the questions posed, but also to test the hyperlink access the survey. The design, hyperlink accessibility and the analysis of the results, was undertaken by the NOMS H.R. directorate, via Survey-monkey.

In terms of the launch vehicle it was identified that, the initial launch would be within a single establishment within the NOMS organisation that we would be able to make use of a global email as a platform from which the links to the survey could be used. Furthermore the option of the internal Intranet was also considered, if as an avenue of further research, the Survey was to be deployed within all of the establishments within the NOMS agency.

Survey Stage 4: Launch and Deployment of the Health and Well-being Survey

Following the successful controlled test of the completed survey model, that included the survey access via the launch vehicle, that of the global email platform. The email was sent to all staff within the single survey area, that is a single establishment, that of HMP Exeter. To facilitate manage, monitor and control the survey, a single partner, (the NOMS H.R. Directorate) managed the survey tool following its successful launch. This included keeping the partners informed as to the level of responders that had accessed the survey throughout the duration of the Survey period. Having a single point of management of the survey also enabled us to deal with effectively any unforeseen technical issues, if required.

The Survey was launched via a Global Email platform on 27th January 2014, and closed at Midnight on 16th February 2014.

The eligibility criteria for the completion of the Survey will be those that are directly employed by the HM Prison Service, specifically employed at HMP Exeter, and fall within 2 specific pay-band groups, that of pay band 1-4 and pay band 5-10. Which reflect those employed that have some management role and duties (pay band 5-10) and those that undertake roles and responsibilities that deal with offenders either directly or indirectly. The sample size is approx 260 staff members, with an anticipated response rate of approximately 25%, which will ensure that we have a broad sample across the organisation.

This Survey Model in the determining the impact of “New Ways of Working” (Dependent Variables) upon physical, mental well-being and organisational Engagement and would take approx 20 minutes to complete.

At the closure of the Survey Completion window, 86 respondents had completed the Survey, a number that represented approximately 20% of the directly employed workforce within a Single site; HMP Exeter. Though only a small sample group; as a representative group, given the ‘demographic’ questions posed (Age, Gender, Length of Service, Pay-band) it is considered, to be sufficient to provide an accurate analysis.

To illustrate how the number of respondents are considered to be ‘representative’, Figures 06–Fig 09 (below) provides not only details of the demographic data of the respondents, but also in regards to this data how they compare to the same demographics within the Establishment as a whole