Studies show that by improving personal eating habits can prevent some of the leading causes of death in the world, such as heart disease, cancer, stroke, some lung diseases and injuries. While a deficit of nutrients can cause vitamin deficiencies, lowered immunity responses, weak muscles, osteoporosis, anaemia, and slower wound healing, amongst other conditions, eating unhealthy things can lead to overweight, obesity, and raised cholesterol levels, with all the problems that these bring.

By having a diet that is low in fat, cholesterol and salt and is high in fruits, vegetables, grains, and fibre will keep your risk of heart disease low. Therefore, it could be said that a healthy diet could save a considerable number of lives, as heart disease is the number one cause of death in some countries, such as Australia (Australia Bureau of Statistics, 2015).Â  As there are many other factors involved, even someone who eats healthy could develop heart disease, but the benefits of a healthy diet has beneficial consequences for the body in general and could even delay the event of such diseases.

The reason for such considerable benefits is mainly because the body has nutritional requirements and when those requirements are satisfied it has large benefits in the function and health of our body. The body on its own cannot produce carbohydrates, proteins, lipids, vitamins and minerals. However, these nutrients can be obtained by consuming healthy food, such as fruits and vegetables.

The Department of Health of the Government of the United Kingdom officially issued a dietary advice called the EatwellPlatein2011. It is a pictorial summary of the main food groups and their recommended proportions for a healthy diet, as illustrated in the graphic bellow: 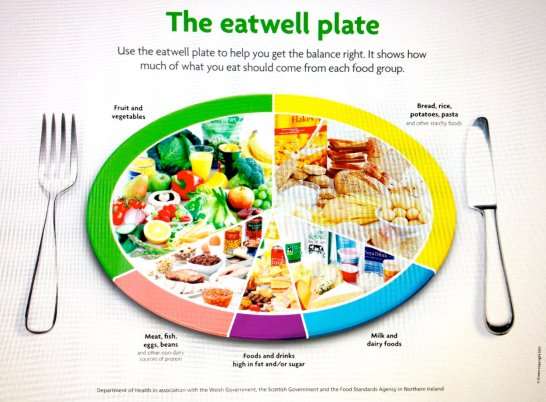 This graphic shows that a balanced diet should contain:

The human system can generally produce most of these minerals.Â  However, it cannot produce at least 16 of them. Before, we could only extract minerals from foods, while nowadays we can obtain them from pills that are sold on the pharmacy and even supermarkets.

By consuming a variety of different foods throughout the day our bodies will be adequately satisfied and will be able to function properly so one will be in healthy conditions and feel good within themselves.Â  Eating healthy is about being aware of what is good for our bodies.

Eating healthy can also makes a person feel good about themselves, raising one’s self esteem. Choosing a healthy food instead of junk food not only helps a person to feel better emotionally but also improves the functions of the body in general.

Healthful eating is about creating and maintaining a healthy diet and it starts by educating ourselves with factual knowledge of the great benefits of healthful eating. Many people today enjoy a greater abundance and variety of food than ever before. Nevertheless, countless health and nutritional problems arise from unbalanced diets and overeating.

It is not that easy to eat healthy, as the researchers, from the Neuroscience Program in Substance Abuse (N-PISA) at Vanderbilt University, USA mentioned, “A high fat diet causes people to eat more, which ultimately impairs the ability of obese people to successfully control their caloric intake, lose weight and maintain weight loss. We have conducted several studies trying to understand why a high fat diet has this effect”. This probably explains the reason why people tend to eat unhealthy junk food.

To sum up, eating healthy have uncountable benefits and it can lengthen your life by preventing certain diseases such as diabetes, heart disease, and obesity at the same time it increases one’s self esteem. Also, as the human body does not produce several nutrients that our body requires for its function, individuals need to have a balanced diet. A balanced and healthy meal would include large portions of fruit, vegetables and starchy foods, a balanced portion of meat, fish, eggs, beans and other non-dairy sources of protein, a balanced portion of milk and dairy foods and a small amount of food and drinks that are high in fat and/or sugar. Even though it could be easier to eat unhealthier, a good knowledge of the benefits of eating healthier could change one’s life for better.

Department of Health, Government of the United Kingdom;Â  Eatwell Plate, 2011